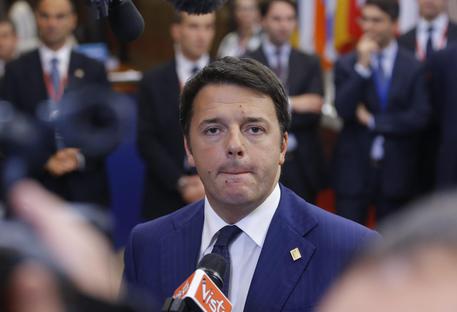 (ANSA) - Rome, October 24 - Premier Matteo Renzi said Friday in Brussels that debate at the European Union summit that just ended was "tough and intense, as always". There are "no particular worries or concerns" over Italy's 2015 budget, the premier added. "We will close what needs to be closed in the next few hours," Renzi told reporters after the meeting of EU leaders.
An agreement with the EU may see the Italian budget's structural deficit reduced by 0.3% instead of the 0.1% in the original budget document, sources told ANSA. Renzi would not comment directly on the report, but said only: "We will be close, you'll see".
Italians should know his government's structural and economic reforms "are right for the country" and are not being implemented on demand by the European Union.
"This is a government that respects everyone but won't stop for anyone," he went on, adding that Italy must stand tall in Europe.
"We need a stronger, prouder, more determined Italian presence," Renzi said. "Italy gives Europe 20 billion euros a year and gets 10 billion back. Our strength and authority are undoubted, and we are not here to be lectured or reprimanded". The premier went on to say he is confident he can negotiate his way out of any EU-imposed sanctions for breaking fiscal rules. "Sanctions don't just get imposed at a snap of the fingers," Renzi told reporters. "They require months of talks and negotiations, and I am very good at those".
Any procedure, he said, would take off in November with the new European Commission headed by Jean-Claude Juncker. "I think...there will room for an understanding," Renzi said. The Renzi government's 2015 budget features a 36-billion-euro adjustment, with 18 billion euros in tax cuts and 15 billion euros in spending cuts.
This includes abolishing the labour-tax component of regional business tax IRAP, and scrapping social contributions for new workers hired on open-ended contracts for their first three years with a company up to a limit of some 8,000 euros a year.
As well, the budget would give families with children born or adopted between 2015 and 2018 an 80-euro monthly bonus. It will be available to families with income of up to 90,000 euros a year, but all families with five or more kids will be able to apply for it no matter what their income.
Renzi has said that around 11 billion euros of financial coverage for the cuts will come from allowing Italy's deficit-to-GDP ratio to drift up towards the 3% threshold allowed by the EU.
But the EC may decide that this means Italy is most doing enough to bring down its massive public debt of over two trillion euros.