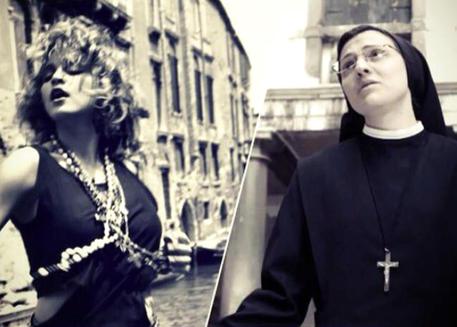 (refiling to correct surname, 3rd graf).
(ANSA) - Rome, October 23 - Madonna has 'liked' on Facebook Italian singing nun Suor Cristina's cover of her first smash hit, Like A Virgin.
"Like A Virgin? #bitinghard", said the pop legend on her FB profile, adding Sisters for Life! #Touchedfortheveryfirsttime and posting two montage pictures of herself with the winner of Italy's The Voice competition.
Suor Cristina - or Sister Cristina Scuccia - chose the Madonna classic to help launch her debut album.
She said the sexy song, famously deconstructed in Quentin Tarabntino's Reservoir Dogs, was "more of a secular prayer than a pop song".
But the choice has not gone down well with Italian bishops. An editorial by the Italian Bishops' News Agency SIR called it a "reckless and calculated commercial operation".
"The public is always intrigued by the devil versus holy water theme, but not even the American nuns in Sister Act would have thought of something like this," the editorial said.
It said the singing nun's claim it was a sort of prayer was a "blessedly naive" comment.
Suor Cristina signed a contract with Universal for an album due out in November.