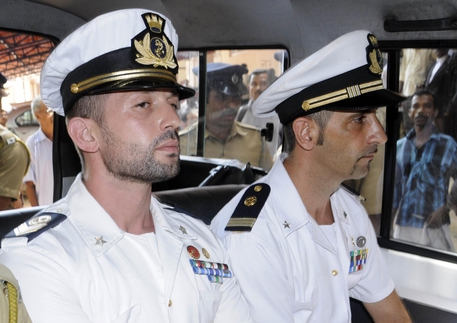 (ANSA) - New Delhi, October 24 - An Indian lawyer has presented a petition to the Supreme Court of India asking that the rigorous anti-piracy Sua Act, a law with death penalty as the maximum punishment, be applied to Italian marines Massimiliano Latorre and Salvatore Girone, both of whom are being held on murder charges for the 2012 deaths of two Indian fishermen in 2012.
In February of this year, prosecutors in the case agreed to drop the request to invoke the law, a move that won praise from the Italian government, which had claimed that its use would have equated Italy with being a terrorist State. Indian lawyer Harshad V. Hameed said he filed the petition "about a month ago" and that he expected it to reach the court docket by November.
Hameed, a lawyer for one of the crew members of the fishing boat involved in the 2012 incident, claims that refusal to apply the anti-piracy law is unconstitutional.