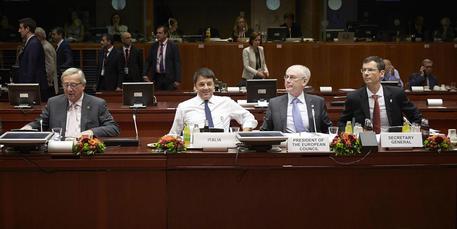 (ANSA) - Rome, October 24 - Premier Matteo Renzi said Friday in Brussels that debate at the European Union summit that just ended was "tough and intense, as always". There are "no particular worries or concerns" over Italy's 2015 budget, the premier added. "We will close what needs to be closed in the next few hours," Renzi told reporters after the meeting of EU leaders.
An agreement with the EU may see the Italian budget's structural deficit reduced by 0.3% instead of the 0.1% in the original budget document, sources told ANSA. Renzi would not comment directly on the report, but said only: "We will be close, you'll see".
Italians should know his government's structural and economic reforms "are right for the country" and are not being implemented on demand by the European Union.
"This is a government that respects everyone but won't stop for anyone," he went on, adding that Italy must stand tall in Europe.
"We need a stronger, prouder, more determined Italian presence," Renzi said after an EU summit. "Italy gives Europe 20 billion euros a year and gets 10 billion back. Our strength and authority is out of the question and we are not here to be lectured or reprimanded".