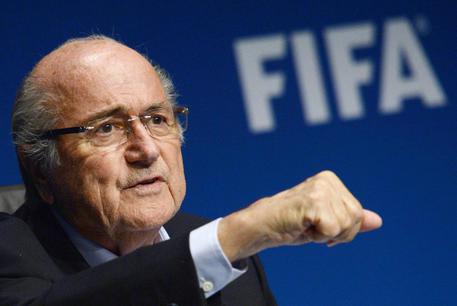 (By Paul Virgo) (ANSA) - Rome, October 24 - FIFA President Sepp Blatter has written to Italian Soccer Federation (FIGC) President Carlo Tavecchio saying he will present his proposals for soccer to accelerate the introduction of technology to help referees to the International Board, ANSA sources said Friday. Tavecchio made the proposal and offered to have the technologies tested in Italian club football after several controversial decisions in champions Juventus's 3-2 win over title rivals AS Roma this month. At the time Tavecchio said he would be the "promoter of a request to FIFA" to accelerate the introduction of technology "for cases of doubt about the position (of a player)". That was interpreted as a sign he was pushing for the use of TV replays for tough calls, such as offside and penalty decisions on the edge of the area. Unlike many other sports, soccer does not give referees the opportunity to use video replays to make tough decisions.
Opponents to technology say it would destroy the simplicity and fluidity of soccer that distinguishes it from other sports. Italian football is frequently hit by high-voltage furores about refereeing decisions and support for technology is strong here. "Thank you for your proposal on the use of technology," Blatter wrote to Tavecchio, according to the sources. "It is interesting. I'll bring it to the attention of the International Board". The International Board is the body that determines the rules of soccer. FIFA has 50% of the voting power on the board, while the rest goes to the football associations of the United Kingdom, a legacy of the sport's origins. If the proposal makes progress, it will be a shot in the arm for Tavecchio, whose image has been tarnished by comments he made on "banana-eating" foreign players before his election in August.
He is currently serving a six-month ban from UEFA commissions imposed by European soccer's governing body for the comments, made as he was calling for tighter restrictions on non-EU players in Italian soccer.
"Carlo Tavecchio's election to the helm of the federation was a defeat for Italian soccer," Juventus Chairman Andrea Agnelli told a club shareholder meeting on Friday.
"It gave the image of a stale movement with no inclination to reform". The Turin giants voted against Tavecchio's election.