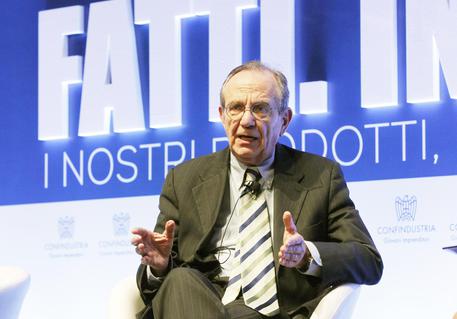 (ANSA) - Naples, October 24 - Economy Minister Pier Carlo Padoan said Friday he was "amazed" at the fuss raised by Italy's publication of a supposedly confidential letter from the European Commission warning Rome not to overstep fiscal limits in its 2015 budget. "We performed an act of transparency to nip fanciful speculations in the bud," he said.
The Italian government's response to the EC's request for clarification about its 2015 budget bill may be sent on Saturday, rather than Friday as previously promised. "I don't know if it will be sent by the end of today," Padoan said. "In the letter (from the Commission) it says that the response should arrive by the end of today (Friday), possibly. And possibly also means that maybe we'll do it tomorrow. The Commission has been warned about this".
Padoan added that the executive was willing to improve the budget but not "turn it on its head". Italy's 2015 budget should not be seen as "austerity" but as "growth" measures, he added.
"Austerity is not spoken of anymore," Padoan said at the Confindustria youth chapter's conference of young industrialists in Naples. Rather, the emphasis is on "how to support growth and investments, especially private (ones)" without which "there is no job creation". As well, the minister declined to explain Premier Matteo Renzi's statement that Italy can easily find two billion euros to fill a possible budget gap as suggested by the EC. "I won't go there," said Padoan. "It is part of a dialogue with the European Commission. The Commission is assessing the (Italian) budget, we are evaluating it together. I have no more to say".