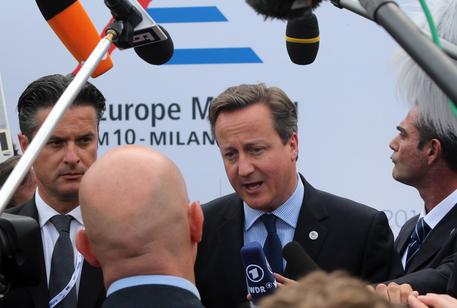 (ANSA) - Brussels, October 24 - Italy may be hit with a 340-million euro bill by the European Union, likely because its new rules on calculating economic growth to include earnings from crimes like prostitution have increased the size of the Italian economy, a British newspaper suggested Friday.
The Financial Times, citing leaked EU documents, said that the new methodology means several countries that were given a break on remittances to the EU because of their initially lower GDP figures must now pay back some of those savings.
British Prime Minister David Cameron, whose country has been hit with the largest bill in the EU at 2.1 billion euros, is outraged and is organizing an emergency summit of European leaders to push back, the newspaper said.
Cameron has already met with his counterpart from the Netherlands Mark Rutte, whose country faces a bill of almost 643 million euros. But with only nine countries reportedly facing higher bills and 19 receiving rebates, achieving unity may be difficult, said the newspaper.
The EU response has been mixed, it added.
While some EU officials say the new bills related to routine reconciliations of national accounts, others connected the bills with the new methods of including crimes in measuring the total size of the economy. Earlier in the year, countries including Italy changed their accounting methods in calculating the total output of the economy, or gross domestic product, in accordance with new EU measures that called for inclusion of proceeds from crimes.
By the new calculations, the Italian economy was flat in the first quarter rather than negative which, combined with losses in the second quarter, would have meant the country was in recession.
And in Britain, September GDP figures doubled to 5% from earlier calculations of 2.5% GDP growth, explaining its high bill.
At the same time in Italy, figures for the national sales tax were also adjusted, dating back to 1995, raising the new bill for Italy.
According to newspaper, the precise bills have not yet been worked out but Germany and France appear to have overpaid in the past and may get EU rebates of 779 million euros and 1.02 billion euros respectively.
Belgium, Denmark and Spain are also likely to receive rebates, the newspaper said.
Bills are to be settled on the first working day of December under the EU's calculations, which are reportedly very complex and opaque.
The story broke as European Union leaders, including Italy's Matteo Renzi, were meeting in Brussels and has created some controversy there.