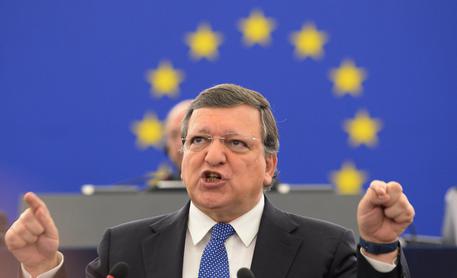 (ANSA) - Rome, October 23 - The Italian government has received a letter from the European Commission asking for clarifications about its 2015 budget bill, the economy ministry said Thursday. In the letter, the European Commission said Italy risks deviating significantly from medium-term budget targets agreed to with the European Union.
"Preliminary analysis...shows Italy has planned a significant deviation from the adjustments requested to reach the medium-term goal (on balancing the budget in structural terms) in 2015," the letter by European Economic Affairs Commissioner Jyrki Katainen read. Premier Matteo Renzi's government recently put off the target year for structurally balancing the budget from 2015 to 2017.
The government said the planned reduction in the structural deficit for next year will be 0.1% of GDP. According to some reports, the EC wants a much bigger reduction in the structural deficit - which, unlike the nominal budget deficit figure, is adjusted for the business cycle - of around 0.5% of GDP in order to make inroads into Italy's massive public debt of over two trillion euros.
The 2015 budget features a 36-billion-euro adjustment, with 18 billion euros in tax cuts and 15 billion euros in cuts generated from a review of public spending and four billion raised from the fight against tax evasion.
Renzi said that around 11 billion euros of financial coverage for the cuts will come from allowing Italy's deficit-to-GDP ratio to drift up towards the 3% threshold allowed by the EU.
But there is speculation that the European Commission may not see the budget plan as compatible with the EU's Growth and Stability Pact and ask for corrections.
"The Italian government will respond to the request for clarification by tomorrow," the ministry said. Renzi said Wednesday that the fact the commission has sent a letter does not mean it is threatening to reject the budget plan, while the Commission itself has also stressed that the "consultations" with Rome do not imply it will issue a negative judgement on the budget.
On Thursday, the central bank weighed in on the issue amid fears of sanctions from the European Commission.
The Italian government made "a reasoned choice" in postponing balancing the budget in structural terms until 2017 to avoid "a downward spiral" in the national economy "given the exceptional duration and depth of the recession," the Bank of Italy said.
Also on Thursday, outgoing European Commission President José Manuel Barroso berated the release of the letter in Italy.
"The Commission was not in favour because we are in a phase of negotiations and consultations with several governments," he said, adding that "most" Italian media outlets have published "lies" and "inventions" about work by him and by the EC.