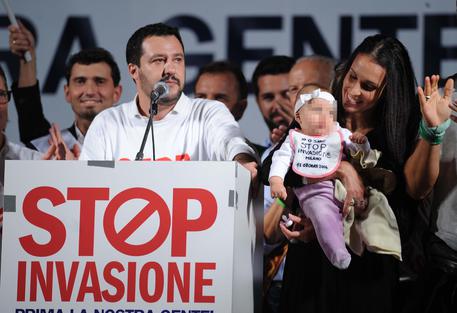 (ANSA) - Strasbourg, October 22 - The Northern League is willing to work with anyone, even Forza Nuova, League leader Matteo Salvini said Wednesday.
The League, which was joined by Forza Nuova members at a recent demonstration against Italy's Mare Nostrum migrant rescue program, will cooperate with anyone who has similar goals and a non-violent approach, Salvini said outside meetings of the European Parliament.
"I deal with the Fiom-CGIL (union federations) when it comes to saving a company, with environmentalists when it comes to protecting a river," said Salvini. Similarly, organizations that oppose too much immigration, "from the right or left, who are in the streets in a democratic, peaceful and non-violent way, I'm happy," he said.
Meanwhile, Salvini slammed Premier Matteo Renzi for his support of the European Commission, "which unfortunately is changing Italy and is destroying it with the complicity of Renzi".
Earlier in the day, Renzi expressed approval for the incoming EC, which was formally approved Wednesday by a vote in the European Parliament.
"Today, the European Parliament approved a commission that is embarrassing, shameful and disgraceful," said Salvini.