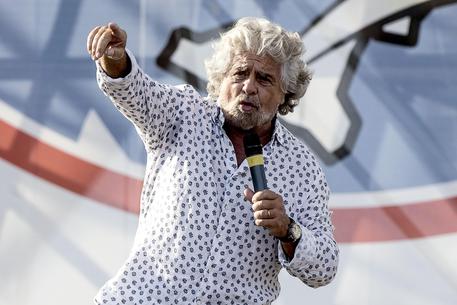 (ANSA) - Rome, October 21 - Anti-establishment 5-Star Movement (M5S) leader Beppe Grillo on Tuesday kept up his campaign to get Italy to leave the euro after spurring controversy with an anti-immigrant rant that included a call for all migrants to have medical tests. Grillo said Italy must exit the euro to avoid a Greek-style financial meltdown. "Let's take back monetary sovereignty and emerge from the nightmare of bankruptcy via default... to not end up like Greece," Grillo, who has launched a drive for Italy to hold a referendum on the euro, said on his blog. "Out of the euro or default. There are no alternatives.
The interest on the public debt is killing the country and dismantling the welfare state".
The comedian-turned-politician returned to his popular blog, which gave life to the Internet-based M5S in 2009, a day after causing a stir on it by calling for undocumented migrants to be expelled from Italy if they are not found to be genuine refugees.
"People who enter Italy on migrant boats are perfect strangers," said Grillo, whose movement captured a quarter of the vote at last year's general election.
"They should be identified immediately. The refugees should be accepted, the others, the so-called illegal immigrants, should be sent back to where they come from.
"People who enter Italy should be subject to an obligatory medical upon arrival to protect their health and Italian people's health".
The Democratic Party (PD) of Premier Matteo Renzi shot down the referendum proposal, saying such a ballot was proscribed by the constitution. "Over and above the value of the proposal, which is abstruse to say the least (...), we remind the Genoese comic and his distracted advisors that the Constitution does not allow referendums to be called on matters and subjects governed by international treaties," said PD MP Federico Gelli. Grillo's hard line on migrants has drawn parallels with the separatist, rightwing Northern League, which is also calling for Italy to drop the euro and to halt the arrival of undocumented migrants.
But Grillo recently knocked back an offer from League leader Matteo Salvini to meet for talks on the issues the two parties agree on.
Meanwhile another controversy continued, about Grillo's latest batch of expulsions from a movement he periodically purges.
On Monday Grillo on Monday expelled four activists after they 'occupied' the stage at the movement's recent Circus Maxiumus rally.
The four - Giorgio Filosto, Orazio Ciccozzi, Pierfrancesco Rosselli and Daniele Lombardi - "took advantage of their role as security officers to occupy the stage," Grillo wrote on his blog.
The rebel group unfurled a banner saying #occupapalco (#occupy the stage) to protest Grillo's allegedly high-handed leadership.
Italian Premier Matteo Renzi reacted by saying the purge was "embarrassing".
He said the four were not espousing "a different line but merely asking what the party leadership structure was".
The M5S's Deputy House Speaker Luigi Di Maio hit back by charging that Renzi "manipulates everything he can".
The M5S heavyweight poured scorn on the government's pledge Sunday to give a tax break of 80 euros a month to new mothers.
"Matteo Renzi manipulates everything he can, we know him very well," Di Maio said, "he is a person who only makes announcements to cover the pigs' mess that he has done, for instance with the stability law and the health cuts, and forcing the local authorities to increase taxes for Italian citizens".
Renzi "is the person who announces the bonus to new mothers in a measure that doesn't exist to cover the fact that Italian women will have to give birth in hospitals that have suffered more spending cuts".
The people expelled from M5S "were four people who were not even elected to the 5-Star Movement who betrayed our trust and to whom we have prohibited the use of the party symbol".