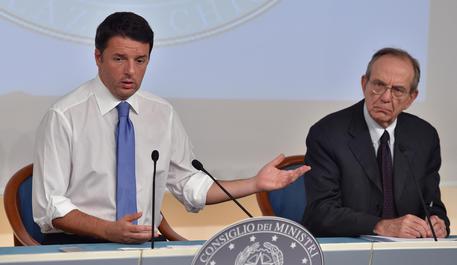 (ANSA) - Rome, October 16 - Italy's regional governments on Thursday led the backlash against Premier Matteo Renzi's 2015 budget bill. The bill, which Renzi presented Wednesday, features a 36-billion-euro budget adjustment, with 18 billion euros in tax cuts and 15 billion in spending reductions.
The regional governments, which have seen their budgets cut severely in recent years as part of austerity measures, are being asked to collectively stump up four billion euros of those spending cuts, with another 1.2 billion coming from city councils. "The budget is unsustainable for the regions, unless you address health spending," said Piedmont Governor Sergio Chiamparino, who is also chair of the conference of the regions.
Governors have also spoken of the possibility of having to raise local taxes.
Renzi, on the other hand, hailed the package as "the biggest tax cut in the history of the (Italian) republic" to help put the struggling economy back on the path to recovery.
He also hit back at the governors.
"We'll meet the presidents of the regions. But let's not fool ourselves," Renzi said via his Twitter account, @matteorenzi.
"If we want to cut taxes, everyone has to reduce spending and demands".
He also told the regions to "start with their waste, rather than threatening tax increases". Chiampiarino retorted: "Those w3ords are offensive, can't there be some waste to be found in ministries?". The budget bill features an extra two billion euros for the national health system fund for 2015.
But it also has a "health-cut" clause for regional governments that warns if they fail to find the four billion euros in savings, the national government will cut health budgets.
Economy Minister Pier Carlo Padoan said Thursday that the 2015 budget will start tackling Italy's jobs crisis, with unemployment over 12% and the jobless rate for under-25s over 40%. "The budget law will create jobs," Padoan told the Radio Anch'io station. "There is money for those on low incomes".
Five billion euros of the tax cuts will go to the abolishment of the labour-tax component of regional business tax IRAP. The bill also scraps social contributions for new workers hired on open-ended contracts for their first three years with a company up to a limit of 6,200 euros a year, according to a draft version of the bill seen by ANSA on Thursday.
Around 9.5 billion euros of the tax cuts will go to finance the 80-euro-a-month income tax bonus for low earners that Renzi introduced earlier this year.
Consumer groups and trade unions shared the regional governments fears about the budget on Thursday. The "recessionary" measures in the budget "hide a sting on consumers," by forcing regional and local government to raise levies on health care and other services, said a statement from Elio Lannutti, president of ADUSBEF, and Rosario Trefiletti, president of the Federconsumatori.
Susanna Camusso, the head of the CGIL, Italy's largest trade union federation, said the measures "do not respond to a real emergency in the country which is to create jobs". Unions representing public-sector workers said the budget includes "wicked" cuts that will bring the public sector "to its knees" and lead to higher taxes at the local level.
In contrast Giorgio Squinzi, head of industrial employers' Confindustria, said the budget featured "a whole series of measures that firms have been waiting for, for years".
While the domestic front is in ferment, there is speculation that the European Commission may not see the budget plan as compatible with the EU's Growth and Stability Pact and ask for corrections.
Renzi said that around 11 billion euros of financial coverage for the cuts will come from allowing Italy's deficit-to-GDP ratio to drift up towards the 3% threshold allowed by the EU.
But the EC may decide that this means Italy is most doing enough to bring down its massive public debt of over two trillion euros.
Renzi, who has been leading calls for the EU to focus more on growth after years of painful austerity and wants greater flexibility in the application of the EU's budget rules, appeared to anticipate possible criticism from Brussels.
The said the new lineup of the European Commission must be able to adapt policies to the current economic situation. "The new heads (of the Commission) must not just simply be new names, they must also interpret a new period," Renzi told the Asia-Europe Business Forum in Milan ahead of the Asia-Europe Meeting (ASEM) of leaders in the northern city. "We either get out of this together or there'll be no winners of the crisis". Italy has told the European Commission that it will reduce its "structural" deficit by 0.1% of gross domestic product between 2014 and 2015 in the draft budgetary plan it sent Brussels.
According to some reports, the EC wants a much bigger reduction in the structural deficit, which, unlike the nominal budget deficit figure, is adjusted for the business cycle. The draft budgetary plan said that the structural deficit will come down by 0.5% of GDP in 2016. Renzi's government recently said in the revised version of its three-year economic blueprint, the Economic and Financial Document (DEF), that it will not be able to balance the budget in structural terms until 2017, one year later than its previous target.