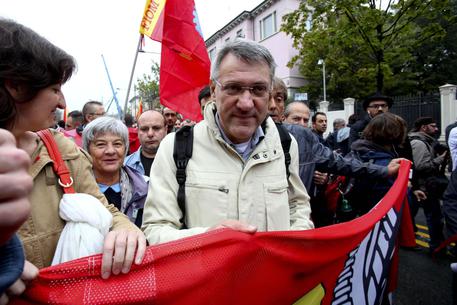 (ANSA) - Milan, October 8 - FIOM leader Maurizio Landini said Wednesday that his leftwing metalworkers union was "ready to occupy factories" during a protest against the EU jobs summit in Milan and the government's labour reforms. "You don't combat job insecurity by making it easier to fire people," Landini said referring to the government's Jobs Act, which includes changes to Article 18 of the 1970 Workers Statute protecting staff form unfair dismissal. "You do it with permanent (job contracts) and by guaranteeing rights to all.
"We are ready to occupy the factories because they are asking us to lower salaries".
Landini also dismissed Premier Matteo Renzi's 80-euro-a-month tax bonus for low earners.
"If Renzi thinks he is cool by giving us 80 euros and he thinks we are idiots because we'll agree to sign salary reductions, he is very wrong," he said.