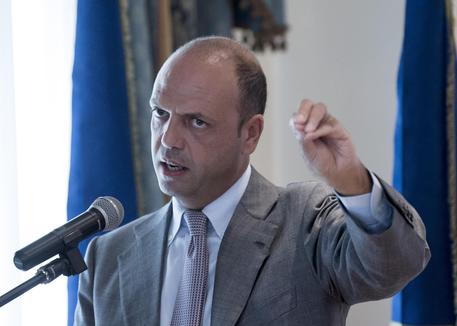 (ANSA) - Rome, October 8 - The centre-right Italian interior minister on Wednesday fought an onslaught of criticism for taking action that prevents municipalities from recognizing marriages performed abroad for same-sex couples.
Angelino Alfano defended himself claiming he was upholding Italian law. Alfano distributed Tuesday a directive to interior ministry prefectures across Italy forbidding municipal governments from transcribing gay marriages performed abroad onto official registries. Alfano's "circular" came the day after the Milan city council had passed a motion authorizing exactly that form of official recognition for gay marriages made outside the country.
"What really impressed me yesterday, was that in front of a directive to prefects inviting mayors to respect the law and not do things in Italy that are not foreseen by the laws, was the quantity of insults and adjectives of unprecedented violence that were thrown at me," declared Angelino Alfano, leader of the New Centre Right (NCD) pro-government splinter party who spoke on the RAI 3 television talk programme Agora'. Alfano added that he personally was "secular" about same-sex civil unions, but that "the family cannot be touched.
Marriage is only between a man and a woman". Roman Mayor Ignazio Marino called Alfano's stance antiquated and obsolete.
"Anyone looking today for conflict over love probably lives in the wrong century. I believe that a discussion of this type in 2014 on any civil union reflects the feelings and visions of the 1900s, of the past century. I think that today, people who love each other should have the possibility of seeing their own love and feelings recognized," said Marino on the margins of an event on Capitoline Hill in Rome.
Milanese Mayor Giuliano Pisapia said Tuesday the city would keep registering same-sex marriages performed abroad despite Alfano's directive.