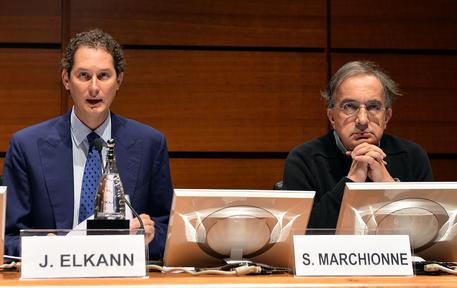 (ANSA) - Turin, October 8 - The president of Fiat-Chrysler Automobiles (FCA) said Wednesday that although he doesn't intend to sell his family's shares in the newly merged automaker, he would consider diluting its stake if it were good for the company.
"I am not a seller," John Elkann, a member of the Agnelli family that founded Fiat, said in an interview with Bloomberg's Businessweek.
Elkann manages Exor SpA, the holding company of the Agnelli family that still owns 30% of the company it founded in 1899.
However, some of the family shares could be sold if a deal were found that would "make the company stronger," added Elkann.
Both Elkann and FCA Chief Executive Officer Sergio Marchionne suggested in the interview that they would keep watch for further merger opportunities - outside Europe as well as within - that could allow FCA to grow beyond its current spot as the world's No. 7 automaker.
According to Marchionne, it is conceivable that further mergers are possible in the auto sector while an analyst quoted by Businessweek said that the need for lower auto prices will drive greater demand for economies of scale and thus, further mergers.
"There is room to create one guy which will be bigger," than Toyoto, the world's current No. 1 automaker, said Marchionne.
He also told Businessweek that he intends to retire in 2018, at the end of the company's current five-year industrial plan integrating the newly merged FCA. "I'll certainly do something else (after 2018)," Marchionne said in the interview. The 62-year-old Italian-Canadian was hired by Elkann in 2004 to run Fiat at time when the company was near bankruptcy.
Marchionne quickly managed to turn around affairs at Italy's biggest private employer and get it back to profitability within two years. In 2009, he struck a deal with the US government that enabled Fiat to take over the then-ailing Chrysler and quickly revived the America company's fortunes before the merger finalized earlier this month.
The new FCA will begin trading on the New York Stock Exchange as a single company next week.