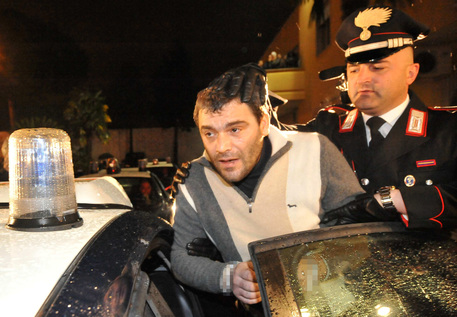 (ANSA) - Caserta, October 8 - Giuseppe Setola, a jailed leader of the Camorra mafia syndicate in the Naples area, on Wednesday requested to turn State witness in exchange for protection for his family. "I've decided to cooperate," Setola told a trial into the death of businessman Domenico Noviello via video link. "Save my family, otherwise the Bidognetti (rival clan) will kill them". He requested to speak to prosecutors later on Wednesday.
Setola is serving multiple life terms for leading an Camorra execution team that between May 2 and December 12 2008 murdered 18 people, including six West African immigrants.
A member of the Casalesi clan whose death threats have forced anti-mafia writer Roberto Saviano into hiding, he was arrested after a manhunt on January 14, 2009 and is now under a tough prison regime usually reserved for mafia bosses.
The mobster, formerly one of Italy's most wanted criminals, had previously eluded capture twice, on one occasion crawling through a long tunnel built under his house where police found sawn-off shotguns, pistols and medication for a fake eye condition.