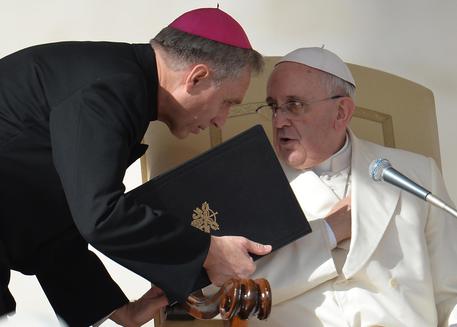 (ANSA) Rome, Oct 7 - A senior prelate insisted Tuesday that marriage cannot be dissolved and that "starting a new union contradicts what the Lord has indicated".
Msgr George Gaenswein, Prefect of the pontifical household and private secretary to former pope Benedict XVI, made the remarks in an interview with Chi magazine, excerpts of which were released in advance on the fringes of a synod of bishops on the family that opened Monday in the Vatican.
"Gays must be received with respect but their acts are contrary to natural law," he continued.
"The Church must have the courage to express its convictions as otherwise it would not be in the service of truth," he added.
Asked about the question of possibly allowing divorced people to take communion, Gaenswein said "this is a very delicate question, at stake is the sacramental matrimony that according to Catholic doctrine cannot be dissolved, just like the love of God for man".
"As far as I can see Pope Francis is following the line of his predecessors whose teaching on matrimony is very clear".