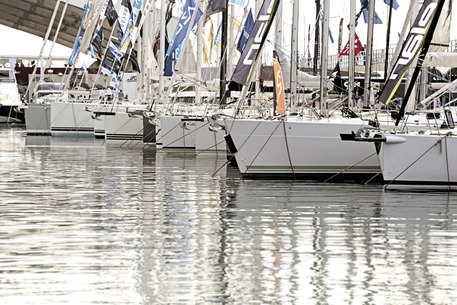 (ANSA) - Genoa, October 6 - Ferretti Group's yachts are certainly at home at the Genoa boat show. At this year's Salone Nautico, from October 1-6, the Italian maker of floating dreams was present with a full range of top models from its brands, including Riva, Pershing, Mochi Craft and Ferretti, as well as with its recently launched Pershing 70 and Ferretti Custom Line Navetta 28. Together with the Riva Mythos and the Ferretti Yachts 650, which made their debut earlier this year, the new models are testament to the Italian company's continuous dedication to innovation at the high end of the yacht business.
Ferretti offers a vast range of boats for almost all tastes (but not wallets), including fly bridges, runabouts, opens, coupés, lobster boats, fisherman boats and maxi and mega-yachts.
With the exception of US-based Bertram, all models are produced at the group's Italian shipyards.
The new Custom Line Navetta 28 is a semi-dislocating ship, characterized by a sinuous and refined design, while the Pershing 70's knockout looks and futuristic shape are the result of a focus on aerodynamics which turbocharge the boat's performance.
"The new models are doing well and the mood is positive.
They have helped shake up the market, especially abroad," according to Ferretti Group chief executive Alberto Galassi. Foreign markets are the main drivers of the industry's sales growth. While Ferretti is mum on its sales figures, people close to the company point out that turnover at firms of its size is likely in the 400 million euro range.
In terms of markets, Asia in particular is growing for the firm, thanks to investments made by majority owner Weichai of China. Ferretti sold just over 75% of itself to the Chinese industrial group two years ago and since then the push into China and Asia - the company already has sales offices in Hong Kong, Shanghai and Qingdao - has accelerated. Among other initiatives to support Ferretti, this year Weichai has opened a new sales center in Zhuhai and is developing a marina resort where Ferretti will have a shipyard from where it will be able to service its local customers. In the future, the site may be used to roll out a new brand, produced locally for the Chinese market only.
In July Weichai carried out an 80 million euro capital increase in favor of Ferretti. Some 50 million euros will be invested as part of a new, three-year industrial plan focused on the rollout of new models. Meanwhile in the company's home market of Italy, the firm is seeing a "timid reawakening" among buyers, Galassi said.
Innovation - constantly launching new models - is important not only for the top (and bottom) lines, but also as a way to communicate with the market and prospective buyers. The reasoning in top management circles at the company is that even if some market segments seem stagnant, if you don't invest you risk losing out. But if, instead, you invest you send a strong signal and are in a better position when things pick up.
Another key part of communications is being present at boat shows, like the Cannes Yachting Festival and Salone Nautico in Genoa. While the company hadn't placed any orders in Genoa as of October 3 (orders often are made after potential buyers have had several opportunities to see a boat), in early September, in Cannes, Ferretti took nine orders for yachts including the new Pershing 70 and Custom Line Navetta 28. At the end of last month, at the Monaco Yacht Show, in Montecarlo, the company sold another yacht, from its CRN line.