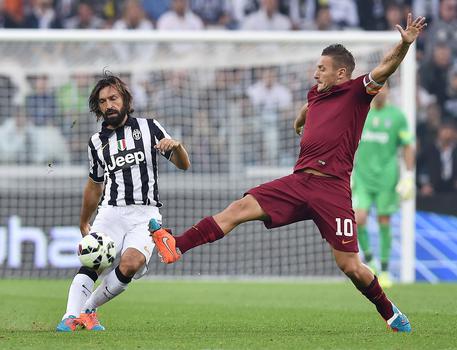 (ANSA) - Rome, October 6 - The old Italian soccer chestnut of alleged favouritism for Juventus was dusted off after their referee-error-strewn 3-2 win over Roma Sunday, with questions asked in parliament about the two bourse-listed clubs as the Italian Soccer Federation (FIGC) urged FIFA to speed technological aid for officials and Italy coach Antonio Conte vowed to help calm things down.
Champions Juventus prevailed and took sole command of the Serie A standings thanks to two dubious penalties and a winning goal that perhaps should have been disallowed for offside. Democratic Party MP Marco Miccolis said he wanted Italy's financial market regulator and economy ministry to look into the Juve-Roma errors.
Miccoli's complaint was based on "the events recorded (Sunday) night during the game between Juventus and Roma" which he said make Italy look bad and hurt shareholders' value.
"Remember that Roma and Juventus are publicly traded companies," he said.
Errors of the sort seen in Sunday's match will drive away future investors, said Miccoli.
Italian Soccer Federation (FIGC) President Carlo Tavecchio told ANSA on Monday that he would request FIFA accelerate the introduction of technology to help referees after the storm raised by the officiating of Juventus's 3-2 win. Tavecchio said he would be the "promoter of a request to FIFA" to accelerate the introduction of technology "for cases of doubt about the position (of a player)". The two penalties were given for offences that appeared to be slightly outside the area, while an offside Juve player appeared to be close to the line of the winning shot. Unlike many other sports, soccer does not give referees the opportunity to use video replays to make tough decisions.
Italy coach Conte said he hoped his national team can bring much-needed calm to Italian football after the storm. "I want my lads to concentrate exclusively on the matches to be played," former Juve boss Conte told reporters ahead of Euro 2016 qualifiers against Azerbaijan in Palermo on Friday and away to Malta three days later. "We'll try to bring calm to this climate with the national team.
"I'm not worried about the relations between the players (from the two teams)," he added. "When you represent a club, it's right to fight for your flag, but there's only one flag in Club Italia". The row over Sunday's match has resurrected long-standing suspicions about referees allegedly favouring Turin giants Juve, Italy's most successful domestic team with 30 Serie A titles.
It has also brought back painful memories of the 2006 Calciopoli match-fixing scandal, which saw Juve stripped of two league titles and demoted to the second tier for a year for involvement in attempts to arrange compliant referees for some teams' matches. AS Roma captain Francesco Totti said Juve had been winning "by hook or by crook" for years and suggested they go and play in a tournament of their own as "we'll always come second when they are in it". Roma coach Rudi Garcia said it appeared that the Juve penalty areas were "17 metres long" and said the row had "hurt football". Conte, who led his former side Juve to three consecutive scudetti before leaving the club in the close season, refused to say whether he was happy to be outside the row.
"Now I'm above everything, I'm Italy coach," Conte told reporters at Italy's training base near Florence.