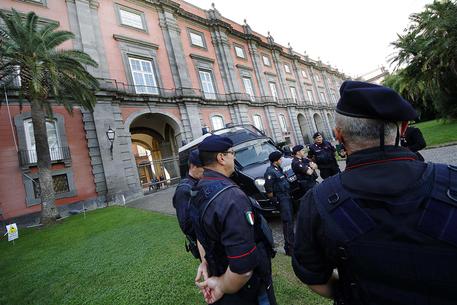 (ANSA) - Naples, October 3 - Security was iron tight in Naples as protestors gathered for march on Thursday with the city hosting a meeting of the European Central Bank's governing council.
There is a big police presence in the southern city, which has been hit hard like much of recession-hit Italy by the economic crisis, amid fears that the demonstrations could turn violent.
One group of demonstrators said these fears will prove unfounded. "A giant climate of fear has been built up around this march," said a protestor called Mauro from the Collettivo 081 association. "Over the last few days we have been forced to explain that the young people of this city are the ones who are protesting, the young people who want a future". However, one protestor in a van taking part in the march claimed to be from the so-called black bloc, hooded youths dressed in black who have caused violence at many protests in the past. One of the many slogans on display read "No ECB, No Austerity".