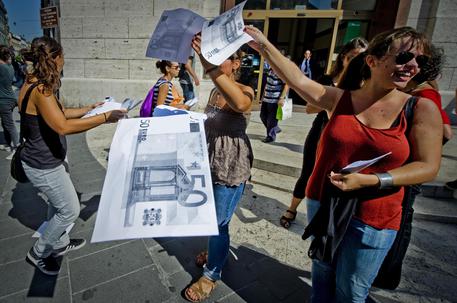 (ANSA) - Naples, October 1 - Activists were gearing up Wednesday for a march to protest a meeting of the European Central Bank (ECB) in Naples. Activists called on the unemployed, the under-employed, students, and like-minded people to join the rally against the European leaders' handling of the economic crisis "with the complicity of governments". They said that they were particularly concerned about the troika, involving the European Union, the ECB, and the International Monetary Fund (IMF), which has imposed harsh conditions on some countries in economic trouble.
The troika's involvement in Greece, for example, has been controversial.
Organizers of Thursday's protest told residents and shopkeepers along the route not to be afraid.
"We have heard of commercial activities or services that are thinking of closing for fear of who knows what, of the coming of who knows what catastrophe," wrote organizers from Movements of Campania Against the ECB on social network pages. "Don't let yourselves be swayed by the press or by the rumours. In the streets, there will be thousands of Neapolitans like you, who have been suffering the crisis for years and only want to demonstrate against the real culprits". "In reiterating the invitation to take to the streets (Thursday) - the only real motive for which it would be worth closing every commercial activity - let's remember that the bankers meeting on the board of the ECB have done more damage than all the protest marches of the last 100 years in Italy," said the group.