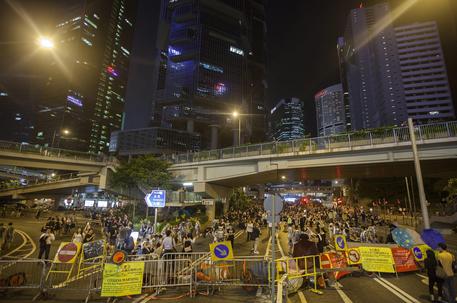 (ANSA) - Rome, September 30 - The Hong Kong government on Tuesday called for an "immediate end" to pro-democracy protests in the former British protectorate as China pledged its support to end the demonstrations that it has defined as "illegal".
Hong Kong Premier Chun-ying Leung however ruled out intervention by the Chinese army to quash the protests, saying he had "full confidence" in the police there. He also rejected calls for his resignation made after riot police used batons and fired volleys of tear gas against demonstrators on Sunday, leaving dozens of people injured. Tens of thousands of pro-democracy supporters are blocking Hong Kong's streets in protest over Beijing's electoral reform law which they fear will prevent free and open nominations for Hong Kong's leadership in 2017.
On Tuesday Premier Leung said "some essential services" had been disrupted as a result of the sit-in.
Meanwhile China reiterated its support to the Hong Kong government and renewed its call on the international community not to interfere in an "internal Chinese affair". On Monday Britain and the US invited the authorities to use "moderation" in their response to the protests.