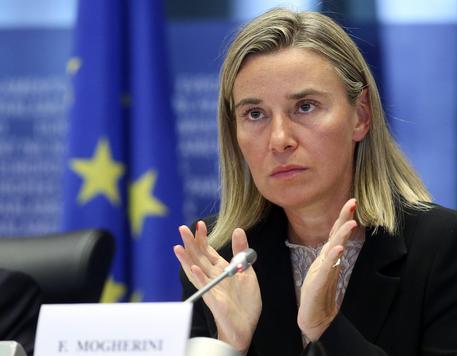 (ANSA) - New York, September 26 - Iran can play "a positive role" in the fight against Islamic State (ISIS) fundamentalist militia after a long hoped-for deal on its nuclear programme is made, Italian Foreign Minister Federica Mogherini said Friday.
"Clearly, reaching an accord with Iran would facilitate relations between the countries that are working to combat ISIS and support the Iraqi government," Mogherini said.
Mogherini said that it was "particularly important" for Iran to reach an agreement regarding its nuclear program in light of the current ISIS threat in nearby Syria and Iraq, where the Islamist fundamentalist militia is carrying out mass atrocities while attempting to carve out a state of its own. She added she is "optimistic" such an agreement can be reached after meeting with her Iranian counterpart, Javad Zarif, on the sidelines of the UN General Assembly on Thursday.
"We agreed it's essential to make progress this week in order to reach a result by November 24," said Mogherini, who was recently appointed foreign policy chief of the European Union.
Iranian President Hassan Rouhani during a address to the United Nations Thursday talked of "result-oriented" negotiations for a compromise on his country's nuclear programme.
Rouhani said Iran's nuclear programme "must pursue exclusively peaceful purposes" and emphasized the need for "time-bound and result-oriented talks to build mutual confidence", calling sanctions "unjust " and "intrinsically inhumane and against peace".
The end-of-November date is the new deadline set for Iran after a failed attempt in July to come to an accord with six world powers regarding concessions it will make on its nuclear program in exchange for a continued reduction in sanctions.
The Italian foreign minister's remarks came as an international anti-ISIS coalition led by the United States launched further air strikes against the fundamentalists in both Syria and Iraq, destroying four of their tanks and three jeeps and interrupting oil extraction in an ISIS-controlled oil field in eastern Syria.
Also on Friday, Mogherini said ahead of a European Parliament foreign affairs committee hearing that the Europe must work as a united front.
"We need common European action in the face of global challenges, beginning with the dramatic challenges at our continent's southern and eastern borders," she said.
"Now more than ever, the EU must come up with a strategic approach not only to current crises, but also to potential ones and to the impact that apparently distant problems could have on our society and our security".