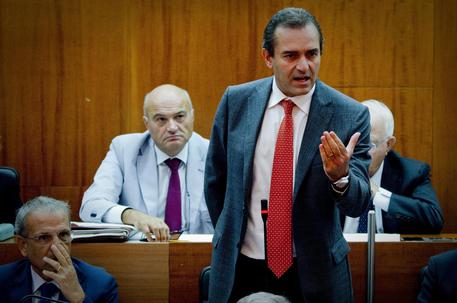 (ANSA) - Naples, September 26 - Naples Mayor Luigi De Magistris told the city's council on Friday that "we are faced with a deeply corrupt State" and suggested his abuse-of-office conviction this week was part of a plot to wrestle control of the city from him.
The former magistrate also refused to quit, shortly after Senate Speaker Pietro Grasso said that a 2012 anti-corruption law suspending people convicted of certain crimes from public office should be applied to his case.
De Magistris was handed a suspended 15-month sentence on Wednesday for involvement in obtaining the telephone data of some MPs, including former premier Romano Prodi, without the proper authorisation during a probe.
"While the picture appears even more confused, it also appears clearer that they are working to get their hands on the city," De Magistris said Friday.
"We have to make our fellow citizens understand that the stakes are high. "I don't think they can wipe out this experience (of local government) with blows landed by judicial technicalities". He added, however, that he was a "man of the (public) institutions" and had faith that "the institutions will be able to repair this violation of the law". He also reiterated that he intended to serve till the end of his term in 2016.
"We don't have arms but we know how to resist and we will resist," he said. "They are calling on me to resign because of this conviction, but looking in the mirror, it's those judges (who handed down the conviction) who should quit". The comments earned the 47-year-old mayor a reproach from the Italian National Magistrates Association (ANM), which blasted them as "grave and offensive". The ANM said the comments were "even more unacceptable coming from a man of the (public) institutions who has had a judicial role for years". "Without going into the judicial case, the ANM notes that the expressions used go well beyond the limits of legitimate criticism of a sentence, because they express contempt for application of the law," added the ANM statement.
Grasso, meanwhile, said he saw no reason why the same anti-corruption law that led to ex-premier Silvio Berlusconi being ejected from parliament last year following a definitive tax-fraud conviction should not be used on De Magistris.
"The Severino law should be applied," said Grasso referring to the measure named after former justice minister Paola Severino. "It's been applied to other mayors. I think it's inevitable that it will be applied. "Subsequently there will be the appeal, which will give a definitive picture of the affair". De Magistris said Friday that the Severino law should not apply to his case as it was approved after the trial against him had started.
Rome prosecutors in May had asked for the case against him to be dropped. They argued he only had a secondary role in the handling of the related part of the so-called Why Not case in the southern region of Calabria and should therefore be acquitted. But a court in Rome ordered the case against him to proceed.