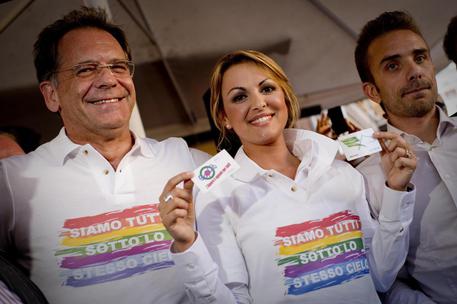 (ANSA) - Rome, September 26 - Ex-premier Silvio Berlusconi's fiancée said Friday that her partner is in favor of gay civil rights.
"He's a liberal," Francesca Pascale, who joined Italian LGBT advocacy group Arcigay and its center-right counterpart Gay Lib in July, said in a radio interview.
Pascale has been invited to be the guest of honor at the closing night of Rome's Gay Village, a nightclub and cultural event that has been drawing hundreds of thousands of revellers from mid-June to mid-September since it was founded in 2002. "I've been supporting the battle for civil rights, which is not a personal battle but a matter of civilization, since long before I got engaged to Berlusconi," she said.
Three-time premier and centre-right opposition leader Berlusconi, 77, got engaged to Naples-born Pascale, 28, two months ahead of the February 2013 general election.
Asked whether she considers herself to be part of a transgressive couple, Pascale answered "I call a 50-year age difference pretty transgressive".
Her husband-to-be, she added, is also in favor of gay rights.
"He is not the problem, but rather the parties in our coalition," Pascale went on. "The New Center Right (NCD) party is a problem not only for civil rights, but for Italy as a whole".
The NCD, currently part of Italy's left-right government and not yet officially back in the centre-right bloc, is a splinter of Berlusconi's now-defunct People of Freedom (PdL) party, and is a vocal opponent of gay marriage and adoption rights.
"A party with 2% of the vote doesn't have the right to pass judgment on everyone else". Pascale added that she would certainly dance with a drag queen, but doesn't take a turn around the dance floor with her fiancé because "he's taken a pledge in church and has given it up". Asked whether her dog Dudù, a Maltese poodle, is gay, Pascale answered: "He is to me".