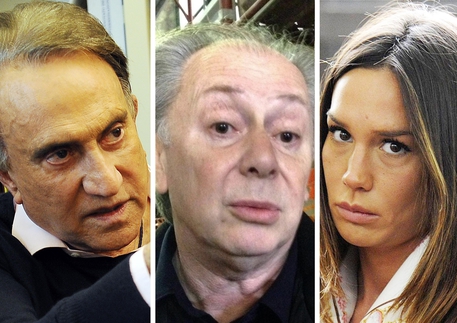 (ANSA) - Milan, September 25 - Lele Mora, a former talent scout who was convicted last year of procuring prostitutes for ex premier Silvio Berlusconi, said Thursday that he is glad his pal was acquitted of paying for sex with a minor.
A Milan appeals court in July overturned Berlusconi's seven-year prison term for paying for sex with an alleged underage prostitute called Ruby and abusing his power to try to cover up the affair.
"The only relations between them were of an economic nature," said Mora.
"She was cunning and he helped her, because he is a generous man".
Mora was convicted last year along with Nicole Minetti, the ex-premier's former dental hygienist and an ex-Lombardy councilor, and Emilio Fede, a well-known former anchorman with the Berlusconi-owned TG4 television station, of organizing "bunga bunga" sex parties at Berlusconi's Arcore residence. Mora and Fede were both given seven-year prison sentences and banned for life from public office while Minetti was sentenced to five years in prison and banned from office for as many years.
Mora, who was in court appealing that conviction, is currently doing community service after he pled out of a bankruptcy fraud indictment in the crack-up of his Im Management company.
"I'm glad Berlusconi was acquitted, because a man can do as he pleases within his own home," Mora went on.
"He certainly didn't need me or Fede if he wanted a couple of young ladies to have fun with".
The former premier's villa at Arcore "was not a brothel," he added. "Those girls were not prostitutes, at the most they were lovers".