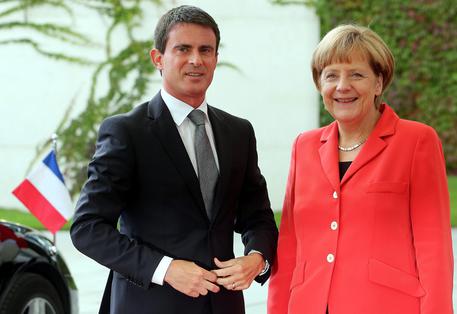 (ANSA) - Berlin, September 22 - German Chancellor Angela Merkel on Monday told a joint press conference with French Premier Manuel Valls that "what has been agreed upon must be respected", citing the European Union's stability pact "which contains some flexibility".
"I see great efforts made by France and they will be evaluated by the European Commission", she added.
Merkel is hosting Valls in Berlin on Monday as France resists demands to narrow its budget deficit in a stagnant economy.
The pact requires member States to maintain their budget deficits within 3% of their total gross domestic product (GDP).
The euro zone's two largest economies are at odds on strategies to spur growth.
Leaders including Italian Premier Matteo Renzi have been urging greater openness within the pact to such measures as increased investment spending to stimulate economic recovery.
Merkel has said she is "open" to greater flexibility within the European Union's stability pact, so long as the basic rules are obeyed Valls has stated he will "not beg" during his trip to Germany, which will also include a speech to Germani entrepreneurs.