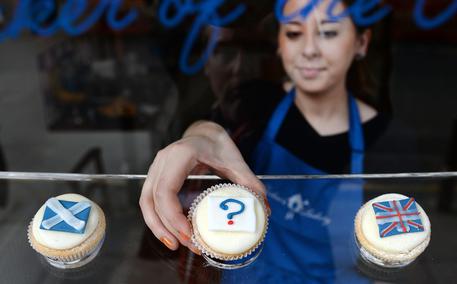 (ANSA) - London, September 17 - Scottish Independence supporters and Pro-UK campaigners made final efforts to rally undecided voters on Wednesday before Thursday's yes-no independence vote, local media reported.
In Glasgow, groups of Independence and pro-UK supporters held mass rallies as last ditch campaigns to sway undecided voters. Polls publiched by BBC showed that 48% of decided voters are in favor of Scottish independence, with 52% saying 'no'.
Daily paper The Herald Scotland published a piece written by First Minister Alex Salmond, telling voters "let's do this", meanwhile UK Prime Minister David Cameron, in the "Let's Stick Together" campaign, said he would not quit if the Scottish Referendum resulted in secession.
"My name is not on the ballot paper. What's on the ballot paper is 'does Scotland want to stay in the United Kingdom, or does Scotland want to separate itself from the United Kingdom?'.
That's the only question that will be decided on Thursday night.
The question about my future will be decided at the British general election coming soon", Cameron said.
Linda Colley of The Guardian Newspaper called the events leading up to the referendum vote "a catalogue of errors" and said London was "out of touch and inward looking". Her opinion piece detailed measures that have brought Scotland to this tenuous vote including Margaret Thatcher's Poll Tax, tested in Scotland and Tony Blair's "pursuing his unpopular war with Iraq.
"Blair allowed nationalists to argue that the union was instead a machine that sucked Scotland into profitless and expensive exercises in overseas aggression", it added while David Cameron's believed that a "protracted referendum campaign would be cathartic". Queen Elizabeth postponed her annual staff ball at her Balmoral residence until the day after the referendum vote, remaining impartial, Buckingham Palace said.