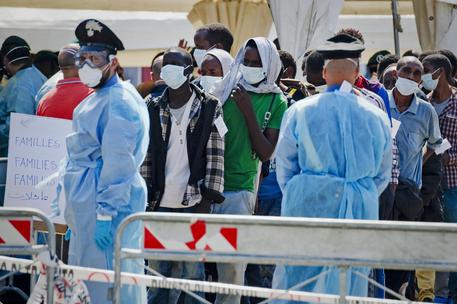 (see related) (ANSA) - Rome, September 16 - Ships brought rescued immigrants to three Italian ports on Tuesday, marking a total of 1,513 new immigrant arrivals in one morning alone.
Of Tuesday's arrivals, 837 immigrants disembarked at the port of Salerno, 507 in Vibo Valentia, and 169 in Catania.
At the weekend, over 800 immigrants died or went missing in boating disasters in the Mediterranean.
"This is a humanitarian crisis without precedent," said the office of the United Nations High Commissioner for Refugees (UNHCR).
UNHCR estimates that 2,500 immigrants have died in Mediterranean waters since the beginning of the year, 2,200 of those in just the few months since the beginning of June. Last week off the coast of Malta, when 500 immigrants drowned or went missing after a boat sank, an official with the Libyan Navy said.
"There are so many dead bodies that they're floating on the sea".
The International Organization for Migration (IOM) called that particular disaster "a mass homicide", as it involved human traffickers.
UNCHR estimates that 130,000 immigrants have arrived in Europe since the beginning of 2014, which is already double the figure for all of 2013, when 60,000 immigrants were registered.
Of the 130,000 immigrants who have arrived on European shores since the start of the year, UNCHR estimates an overwhelming 118,000, or 90%, arrived in Italy, "most of whom were rescued by Italy's Mare Nostrum search-and-rescue operation".