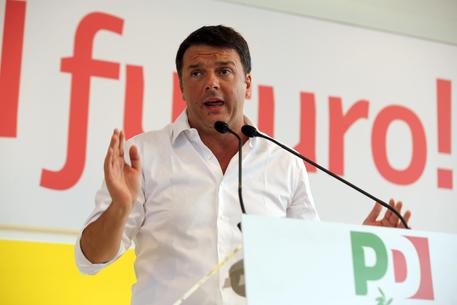 (ANSA) - Berlin, September 8 - German Finance Minister Wolfgang Schaeuble said Monday that Italian Premier Matteo Renzi is on the right track with his far-reaching reform program. Renzi "is following an absolutely correct approach with regard to the deep structural reforms in his country," Schaeuble told Yahoo in an interview, adding he hoped the Italian leader would succeed. Renzi has been pushing for sweeping reforms including changes to the Italian labour market, justice system, and tax regulations in an effort to make the economy more efficient and to create employment.
The cabinet last month approved sweeping measures to revamp Italy's judicial, political and economic systems, including the government's so-called Unblock Italy decree designed to cut red tape, promote investments and lift the Italian economy out of recession, its third in six years.
Renzi pledged 4.6 billion euros for five airport investments and 3.8 billion euros for projects "that are ready to be built", and confirmed the government will continue to offer his trademark 80-euro monthly tax bonus for some 11 million low-income Italians "for the next few years". The cabinet also approved spending of 10 billion euros over "the next 12 months" on public works in Italy's impoverished south.
Schaeuble's favorable assessment of Renzi stood in apparent contrast to his later remarks that State-run job creation programs in the eurozone are the wrong approach, and that the sustainable way forward is more efficient investment of private funds.
As well, Renzi and his French counterpart, Manuel Valls, were on the front pages of leading French papers after they entered into a so-called "tortellini pact" on Sunday. The Italian premier invited fellow leftist European leaders to the Democratic Party (PD) Festa dell'Unità (Unity Feast) in the northern Italian city of Bologna on Sunday, where he called on them to enter into a pact to promote a socialist agenda in Europe in front of a plate of tortellini.
Spanish Socialist party leader Pedro Sanchez, Party of European Socialists leader Achim Post and Dutch Labour Party MP Diederik Samson also participated in the tortellini pact, as Renzi dubbed it.