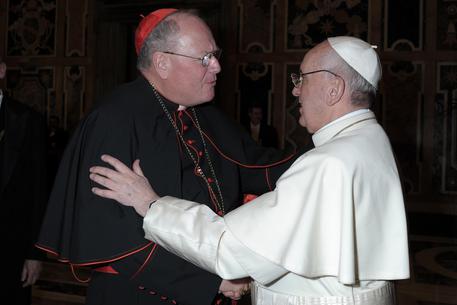 (ANSA) New York, September 5 - The Roman Catholic Archbishop of New York, Cardinal Timothy Dolan has declined to hand over to the Archbishop of Peoria, Illinois, Daniel Jenky, the remains of an aspiring saint, Fulton Sheen, one of the first television evangelists, Church sources said Friday.
The feud between warring senior prelates for custody of relics of the dynamic preacher started after his death in 1979 when many Catholics began campaigning for Sheen to be put on the path to sainthood.
Sheen was declared "venerable" by then Pope Benedict XVI in 2012 as part of his beatification, the first step toward becoming a saint, after a miracle attributed to Sheen, the re-animation of an apparently still-born baby, was recognised by the Vatican.
The next stage was the examination of Sheen's body "so the necessary relics could be removed," for which Peoria asked the re-exhumation of the body and its transfer to Illinois.
Dolan, however, vetoed the body being re-examined and the candidature of Sheen for sainthood was postponed indefinitely, according to the sources.
Born in Peoria, Sheen was famous, winning two Emmy Awards for his programme "The Life Worth Living," while his books on the Virgin Mary were best-sellers and he had a large personal following among the faithful.
Fiercely anti-communist, Sheen was credited with converting to Catholicism famous figures such as the auto magnate Henry Ford and Clare Boothe-Luce, the American heiress and ambassador to Italy.
In 2012 after his beatification Sheen's body was buried in St. Patrick's Cathedral on 5th Avenue, New York.
Jenky in a statement noted that subsequently "after further discussions with Rome it was decided that Sheen's candidature for sainthood be relegated to the historic archive of the Congregation of the Saints".
Cardinal Dolan, who was considered one of the favourites to become pope in the last conclave, denies having blocked Sheen's sainthood, vowing to try and kick start the procedure if Peoria withdraws its claim to the tv evangelist's remains.
"It was Sheen's wish to be buried at St Patrick's," said a spokesman for Dolan, Joseph Zwilling, "his closest heirs want him to remain here".
Sheen's family evidently have approved his exhumation but Dolan is firmly opposed to the search for relics of the venerable preacher.
"Dismembering the body is worrisome," the spokesman for Cardinal Dolan said.