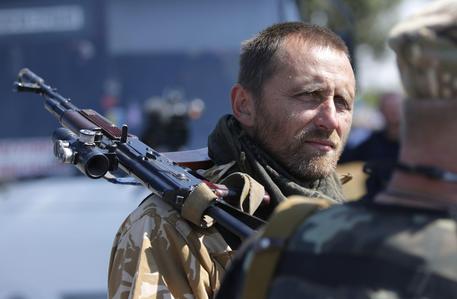 (See related) (ANSA) - Moscow, September 5 - The Kremlin suspects NATO is using the crisis in Ukraine to further its own agenda in the region, a spokesman for the Russian foreign ministery said Friday.
The comments came during a NATO summit that focused on the crisis in Ukraine, where pro-Russian rebels have been fighting the government.
At the same time, a plan for a ceasefire in Ukraine was reached.
Authorities in Russia fear that NATO may be taking advantage of the situation to implement a longstanding plan for a greater presence in the region.
Meanwhile, Ukraine President Petro Poroshenko is prepared to offer "extraordinary" concessions on decentralizing some government powers as well as guaranteeing language and cultural protections to pro-Russian rebels, Russian news agencies said Friday.
Poroshenko said that as early as Saturday, political authority could be decentralized in the disputed areas of Donetsk and Lugansk along with promises of freedom "to use any language supported by cultural traditions," he reportedly said.