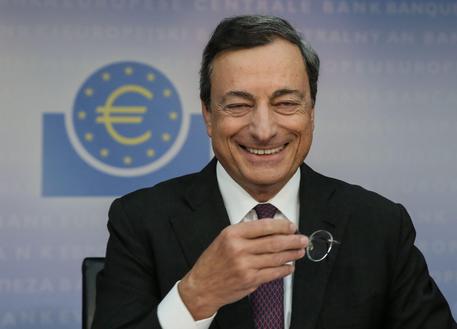 (ANSA) - Rome, September 5 - American and European pundits gave economic stimulus measures taken by European Central Bank (ECB) President Mario Draghi a mixed reception Friday, echoing the fears of many in the business community that lenient central bank policies might provide "undisciplined" countries such as Italy another excuse to delay key reforms.
Draghi on Thursday announced the ECB will begin to buy asset-backed securities (ABS) and covered bonds in October to encourage credit flows and economic growth, while also cutting its main interest rates for commercial banks and lowering many of its forecasts for economic growth and inflation.
But the central bank apparently stopped short of outright quantitative easing of the style used by the United States Federal Reserve, although Draghi gave notice that if necessary, the ECB could still implement "unconventional" measures. Draghi has launched a "counteroffensive" against deflation and weak eurozone demand, but his chosen course may be fraught with difficulties, the Financial Times of London editorialized. For one thing, it said, he will have to make sure the ABS purchases are "big enough to make a difference".
"The concern is that unconventional measures will ease the pressure on crisis-ridden countries, such as Italy, to carry out painful structural reforms".
The sentiment was the same across the pond.
"Too bad the politicians keep using Mr. Draghi as an excuse to dodge their responsibility to pass pro-growth reforms," the Wall Street Journal wrote in an op-ed.
While Draghi has been preaching the gospel of reform for years, "these never arrive".
Europe's biggest economic stumbling block is its political class, which refuses to face structural obstacles to growth such as high taxes, too much business regulation, and a rigid labor market, the American paper went on.
In Germany, opinion-makers were unanimous that Draghi is treading on thin ice.
"Draghi must be desperate," wrote conservative paper Frankfurter Allgemeine Zeitung. The ECB is taking on excessive risk in order to prop up shaky economies such as those of France and Italy, which unlike Spain, have put off making key social and labor reforms, the paper opined. Draghi "is playing with fire", wrote liberal German paper Sueddeutsche Zeitung, going on to say that his rate cuts are purely "symbolic".
While "emergencies engender creativity, not all inventions are reasonable", the Bavarian paper wrote.