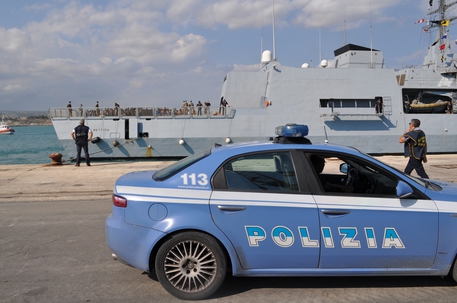 (ANSA) - Palermo, September 4 - Consap police union announced Thursday it is filing a class-action suit against the interior ministry after 40 policemen working with recently arrived immigrants tested positive for TB.
There are also three confirmed cases of TB infection, one each in the cities of Bologna, Ferrara, and Terni, the union said.
There is a difference between TB infection and TB disease.
Testing positive means the person has been exposed to TB bacteria and must be treated.
If left untreated, the infection may develop into the full-blown disease, usually in people with low immune systems.
When a person has active TB disease, the individual may be contagious to others, particularly those with whom they spend the most time.
"Semantic differences between positivity and infectiousness certainly do not reassure the almost 50,000 fellow officers who work with (recent) migrants," Consap said. Opposition politician Beppe Grillo earlier this week accused the government of "re-importing TB" into Italy and suggested new arrivals - many of them from Africa and the Middle East - should be quarantined "as our forefathers were on Ellis Island" in New York.
He then sparked accusations of racism when he posted a picture of Interior Minister Angelino Alfano in blackface in a criticism of the government's migration policy.
Italy launched its Mare Nostrum rescue operation in October 2013 after the deaths of 400 migrants in two boat disasters in the seas off southern Italy.