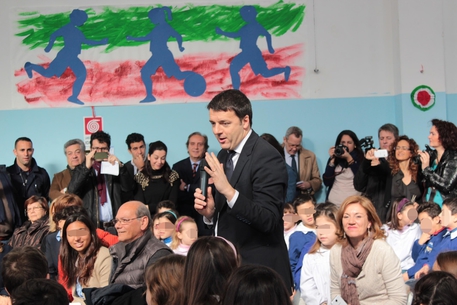 (ANSA) - Rome, September 3 - The administration of Premier Matteo Renzi on Wednesday unveiled a school reform package that includes hiring 150,000 teachers by September 2015, according to guidelines posted on a government website. Renzi also intends to make it simpler to hire new teachers, eliminate cumbersome waiting lists that reportedly can last for years, and cut substitute teaching. Writing on the website, Renzi said that teachers must be hired on their merits and not merely seniority.
"We say enough to temps and substitute teachers, we must have the courage (to hire teachers on merit)," he said.
Italy currently has 600,800 full-time teachers, while another 154,000 work as temps.
The so-called 'schools package' is part of efforts by Renzi's government to kickstart the Italian economy, which has slipped back into recession, and reportedly includes planned investment of one billion euros on top of funds already made available for a school building programme announced earlier this year. Earlier on Wednesday, Renzi told Sole 24 Ore financial daily that his government intends to cut spending by 20 billion euros to free up resources for priorities in research and education, without raising taxes. The cuts could take the form of a 3% reduction across government ministries, Renzi explained.
The government's school reform plan would entail far-reaching changes for students as well as staff.
The novelties begin in primary school, where kids would get musical and physical education classes, while mandatory foreign-language classes would begin in elementary school, and high schoolers would see beefed-up art history, computer science, and economics courses. As well, the government would introduce mandatory work-study programs in technical institutes, upping the budget for such programs from 11 million euros this year to 100 million euros going forward.
Another innovation will be apprenticeships in traditional crafts that are at risk of being forgotten, and the roll-out of an experimental internship program in the last two years of high school.
The package would partially rely on some 800 million euros in European funds for the 2014-2020 period, but the government also plans to woo the private sector. Measures would include school bonuses for businesses and foundations, a so-called School Guarantee program for firms that headhunt in technical institutes, and a crowd-funding program, with the State to match every euro donated by a private citizen to the public school system.