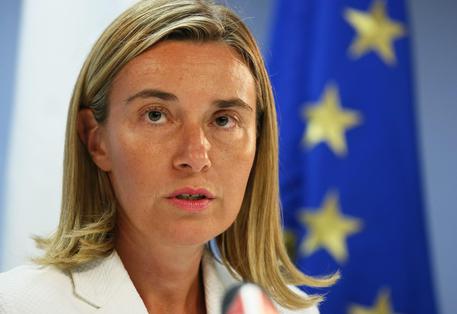 (ANSA) - Rome, September 1 - Bringing the two Italian marines detained in India back to Italy remains an Italian government priority, Foreign Minister Federica Mogherini said Monday after one of the pair was hospitalized with a condition similar to a mild stroke. "I feel close to Massimiliano Latorre and I wish with all my heart that he can get back as soon as possible," Mogherini said in a statement.
She reiterated that message to Paola Moschetti, companion of marine Massimiliano Latorre who has been hospitalized in New Delhi, the Italian foreign ministry said in a statement.
Doctors said Latorre has been responding well to treatment in the neurology department after he lost consciousness due to a mild cerebral ischemia, or restriction of blood supply.
"As it has always been in these months, we follow the case of the two marine riflemen every day, with the aim of bringing them back to Italy: it is a priority for the government," added Mogherini who on Saturday became the European Union high commissioner for foreign policy.
Defence Minister Roberta Pinotti flew to New Delhi to check on his condition and to show support for Latorre's family members who are with him in India. Doctors said they were "pleased with how he responded to the first treatment," according to a statement from the Italian defence ministry.
Latorre and Salvatore Girone are living at the Italian embassy in New Delhi after being detained in connection with the shooting deaths of two Indian fishermen during an anti-piracy mission in 2012.
Latorre and Girone are accused of killing fishermen Valentine (aka Gelastine) and Ajesh Binki after allegedly mistaking them for pirates and opening fire on their fishing trawler while guarding the privately owned Italian-flagged oil-tanker MT Enrica Lexie off the coast of Kerala on February 15, 2012.
Rome has protested a long series of delays in the case, which has caused major diplomatic friction between the countries.
The frustration was displayed Monday by Giulia Latorre, daughter of Massimiliano, in an angry post on her Facebook page.
"What great news...My father has had an ischemia. Sadly there is never good news, only sh***y news," wrote Giulia Latorre.
"You, s***y Italy, let them stay there a bit more", she said, referring to the length of time that has passed with no resolution in the case.
Italy successfully fought to ensure that the Indian government took the death penalty off the table in the case and that it dropped the application of a severe anti-terrorism, anti-piracy law, which it said would have equated Italy with a terrorist state. Nicola Latorre, Democratic Party (PD) chairman of the Senate defence committee, blamed the "unjust detention in India" of the two marines for creating overwhelming stress for the pair and contributing to Massimiliano Latorre's illness.