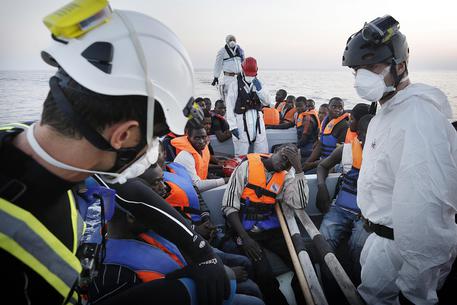 (ANSA) - Rome, September 1 - Almost 4,000 migrants arrived in Italy over the weekend, including one ship bearing as many as 100 children and at least two pregnant women among its 1,044 passengers, authorities said Monday.
A navy frigate brought that group to the port of Salerno after rescuing the migrant vessel in the Strait of Sicily under Italy's search-and-rescue operation Mare Nostrum. Authorities said the migrants will be transferred to accommodation centers in regions all over the country including Liguria, Piemonte, Lazio, Tuscany, Veneto, Umbria, Friuli, Basilicata and Abruzzo. Many of the total arriving between Friday and Sunday evening sailed from North Africa on rickety vessels, keeping Italian rescue vessels active in finding migrants making the perilous crossing.
Last week, Interior Minister Angelino Alfano announced that Italy's Mare Nostrum, which was set up almost one year ago as a temporary measure, will be replaced by an expanded version of European Union border control agency Frontex.
The Italian operation has cost nine million euros a month, taking up the bulk of the Navy's budget.
Italy had been calling for the EU to step in to shoulder some of the burden.