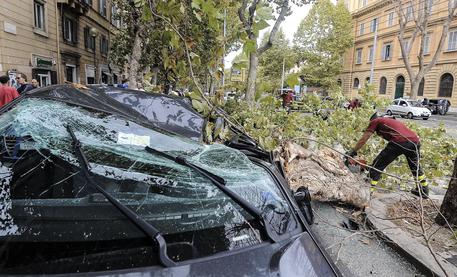 (ANSA) - Rome, September 1 - Civil protection authorities on Monday issued weather alerts for most of Italy as a wave of inclement weather pounded the peninsula and meteorologists predicted more heavy rains and squalls.
Snow fell above 2,000 meters in the northern Friuli Venezia Giulia region, where volunteer firefighting chief Alexander Mayr, 39, lost his life when a landslide swept him into a torrent. Mayr was working to clear a state road from debris when a landslide swept him into the Isarco torrent. Attempts at resuscitation were unsuccessful.
In Calabria, a woman was hospitalized with non life-threatening injuries when the wind uprooted a tree, which fell on her, while a tornado tore roofs off buildings and uprooted trees in the seaside resort of Diamante, near Cosenza. Near the northern city of Arezzo, a 40-meter section of the roof of a 14th-century curch caved in under the weight of water following torrential downpours, while in Rome, four people were hospitalized, including a pregnant woman, when a tree branch crashed on their car as they drove in heavy winds.
Also in Rome, strong winds tore through one of the city's largest open-air markets, making off with stalls and damaging the merchandise beyond repair.
In Genoa, winds of over 30 knots forced a Lufthansa flight from Munich to be rerouted to Turin. Passengers were taken to Genoa by bus. Operations slowed down in Genoa port due to heavy winds, and fire fighters were called to remove fallen trees and signs, and to secure roofs that were in danger of being blown away. In the Campania region south of Rome, emergency services were working Monday to remove mud and debris from an overflowing river that covered a section of highway linking the cities of Salerno and Avellino. A creek overflowed in a town near Avellino, carrying off eight parked cars, flooding basements, and causing landslides.
In the Naples area, 18 firefighting units are deployed in aid of stranded motorists and to empty out flooded basements after a rainstorm pelted several towns around the provincial capital.
In the seaside town of Civitavecchia near Rome, where a tornado was seen gathering offshore, winds of over 55 knots drove a Costa Crociere cruise liner onto the dock, damaging one of the ramps, company sources said.