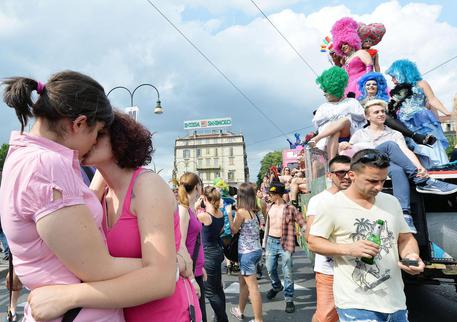 (ANSA) - Rome, August 29 - A Rome court on Friday approved the first adoption of a child by a gay couple in Italy.
The girl is the biological child of one of two lesbians, a professional couple.
It was the first Italian instance of stepchild adoption. Italy does not recognize other civil rights of gay couples living together, unlike the laws in some other countries.
The couple, who have been together for 10 years, conceived their five-year-old daughter through an assisted fertility procedure in an unspecified European location, their lawyer Maria Antonia Pili said.
She said Italy's laws are based on finding what is best for the child and the best possible family situation in any adoption case. A gay rights organization called Friday's ruling "very beautiful" and good news for the family in question. Franco Grillini, president of Gaynet, said that thousands of children of homosexual couples have suffered when the death of a biological parent has torn the child away from the parent's gay partner.
Rainbow Families, representing gay and transgender families, said the ruling broke "taboos".
However, Maurizio Sacconi, Senate leader for the New Centre Right (NCD) political party, denounced the "irresponsibility" of the courts, suggesting the ruling contradicts what he called the will of parliament in restraining the rights of same-sex couples.
In contrast Sergio Lo Giudice, a Senator with the centre-left Democratic Party (PD), said the court ruling is showing parliament the direction it should take in lawmaking.
Lo Giudice called the decision "another humiliation for a parliament deaf and blind to the fundamental rights of individuals, a wonderful day of civilization for our country".
This Rome court ruling follows a decision by the country's high Cassation Court which, in January 2013, approved adoption by gay couples where one partner is the parent of the child in question so long as authorities determine there is no threat to the child's development.
That high court ruling involved the 2011 case of a Muslim immigrant couple in Brescia where the mother of a young son had left her male partner for a lesbian relationship.
The boy's father argued that was an unhealthy arrangement for the child, but the Cassation Court disagreed, saying that it required much more proof of a detrimental environment than the mere fact the mother was in a gay relationship.