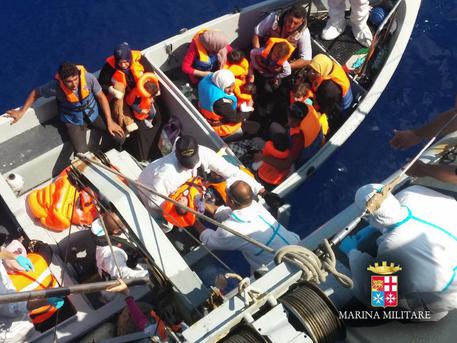 (ANSA) - Rome, August 28 - Opposition politicians on Thursday slammed Frontex Plus, the EU-led migrant search and rescue programme that is to replace Italy's Mare Nostrum operation in November.
"The operation dreamt up by (Interior Minister Angelino) Alfano and (EU Home Affairs Commissioner Cecilia) Malmstrom is the usual rip-off," said Deputy Senate speaker Roberto Calderoli of the anti-immigrant Northern League, the day after Alfano announced that Mare Nostrum would be replaced by an expanded version of European Union border control agency Frontex.
Party colleague Nicola Molteni likewise called the new programme a "bluff" and a "farce" that would "continue to claim lives and cause thousands of illegal immigrants to arrive each day under a different name".
Italy set up Mare Nostrum in October 2013 after 400 people perished in two migrant boat disasters off the coast of Sicily. However, in recent months the country has been calling for the EU to shoulder some of the burden of dealing with the influx of immigrants to Europe from war-torn north Africa and the Middle East, whose numbers have increased sharply since the start of the year. Meanwhile seven Egyptian nationals were detained in Sicily on Wednesday night on suspicion of trafficking 442 migrants to Italy, including around 100 Palestinians fleeing fighting in Gaza.
They arrived in Pozzallo on board a freighter after being rescued in the Sicily Channel. Investigators say the hazardous journey earned the traffickers around one million dollars. Separately, the Sicilian coast guard on Wednesday found an empty boat with Arabic on the side caught in rocks off the Agrigento coast. So far a police land search for the presumed migrant occupants has been unsuccessful. And on Thursday 407 migrants almost all of declared Syrian nationality arrived in the port of Brindisi in the southern Puglia region after being rescued off the coast of Libya.
A further 225 Syrian refugees were due to arrive in the Sicilian capital Palermo on Friday morning.