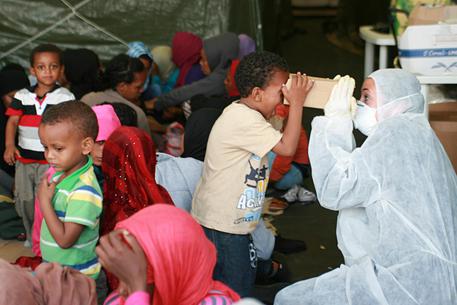 (ANSA) - Rome, August 27 - More child immigrants have arrived on Italian shores between January and July 2014 than in the entire course of 2011, Viviana Valastro, Save the Children Italy's Director of Child Immigrant Protection, told ANSA on Wednesday.
Valastro said that 8,600 of the 14,000 child immigrants who have arrived on Italian shores in the first seven months of 2014 were unaccompanied by an adult, and that nearly one-third, or 2,737 of those children, were from Eritrea, where they are fleeing a dictatorship.
The remaining 5,400 children immigrants so far in 2014 were accompanied by one or both parents, and since 2013, the fastest-growing group of children in this category has come from Syria, said Valastro.
"With respect to 2011, the proportion of minors who have arrived with their family has gone up 18 times, while the proportion of unaccompanied minor immigrants has 'only' doubled," Valastro said.
In 2011, the year of the Arab Spring, 4,500 child immigrants arrived in Italy over the course of the entire year.
Valastro said that most immigrants see Italy as a transition point before being taken by smugglers to reach relatives in northern European countries like Germany, Switzerland, the Netherlands and Denmark.