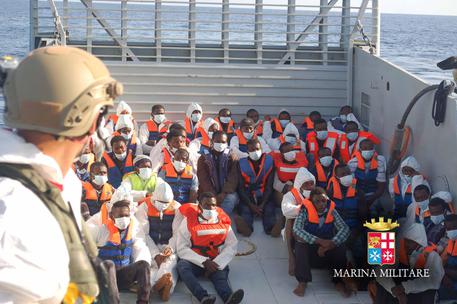 (ANSA) - Rimini, August 25 - Italy's Mare Nostrum (Our Sea) migrant search-and-rescue operation should become a multinational mission along the lines of the EU's Atalanta anti-piracy operation in the Horn of Africa, Navy Chief-of-staff Giuseppe De Giorgi said Monday.
In this way, Italy would no longer have to bear the economic brunt of saving thousands of lives between north Africa and southern Italy, the admiral told an annual meeting of the Roman Catholic Communion and Liberation movement in the Adriatic resort town of Rimini.
Since Mare Nostrum kicked off in October last year, as many as 113,000 people have been plucked from the sea by Italy's Navy, coast guard, and merchant vessels, the admiral said.
Most are from war-torn Syria and Eritrea, he said.
It takes as much as nine million euros a month to keep Mare Nostrum afloat, against the Navy's total monthly budget of 9.2 million euros, he added.
That number includes fuel and operational costs to maintain five ships backed by helicopters and other patrol aircraft.
"This means we had to suspend our training exercises. We can only carry on if this spending is reimbursed, otherwise we can't make it," he alleged.
The multinational force could be led by Italy, or it could have a rotating command with the navies of other countries such as France and Spain, the admiral said.