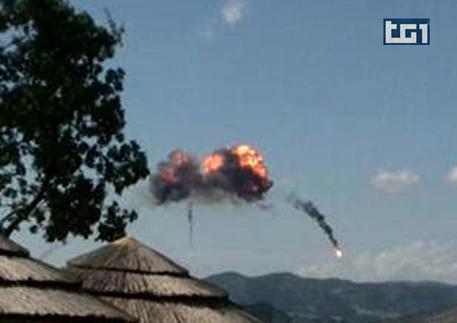 (ANSA) - Rome, August 20 - Italian military sources on Wednesday said they found a second body during their search for four Air Force aviators missing after a mid-air collision above the Marche region. Sources also said the first badly burned body recovered in the fuselage of one of the downed aircraft was that of a man. The downed aircraft was recovered in the area of Tronzano, a suburb of the Marche town of Ascoli Piceno while the second body was found some distance away.
No further details were immediately available.
Earlier in the day, Italian military officials named the four aviators - three men and one woman - missing after Tuesday's mid-air collision above the Marche region.
They are Alessandro Dotto, Guiseppe Palminteri, Mariangela Valentini and Piero Paolo Franzese.
The search continued through the night and into Wednesday morning for the missing pilots and co-pilots.
Dotto was captain of one aircraft with Palminteri as co-pilot, while Valentini was captain on the second craft with Franzese as her co-pilot, military officials said.
Their two Italian Air Force Tornado jets collided in midair while on a training run, then crashed into wooded hills in the Marche region, setting off raging forest fires, officials said Tuesday.
Search-and-rescue teams continued through the night, combing the forested area surrounding the crash site for signs of the missing aviators.
Air Force helicopters equipped with night-vision equipment were brought in for the search, which focused on an area near the village of Casamurana where an orange parachute was found.
Valentini, 31, is an experienced fighter pilot who has been involved in operations in Afghanistan in 2010 and Libya in 2011, officials said.
It was initially believed that all four ejected from the planes before they crashed, unofficial sources said. On the ground, firefighters battled various blazes in the wooded hills overlooking Ascoli Piceno after the crash as the flames drew closer to Casamurana.
Eyewitnesses saw one of the two jets burst into flames after they touched in midair, then both craft fell out of the sky.