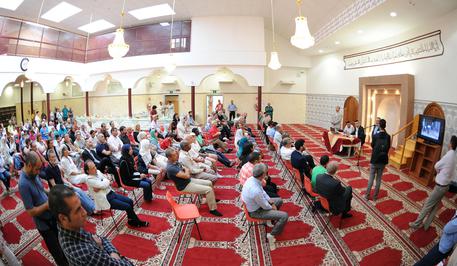 (ANSA) - Rome, August 5 - Interior Minister Angelino Alfano on Tuesday ordered an imam expelled from Italy for incitement to anti-Semitic hatred.
"Oh Allah, count them one by one and kill them all," the Moroccan imam, Raoudi Albdelbar, allegedly preached in a Friday sermon last month in a mosque in the northern city of San Donà di Piave, near Venice.
His videotaped sermon was released by the Washington, DC-based Middle East Media Research Institute (MEMRI), which was founded by a former Israeli intelligence officer and an Israeli-born American political scientist.
The interior ministry expelled the imam for "seriously disturbing the peace, endangering national security, and religious discrimination" after reports of the sermon and the videotape surfaced in Milan-based center-right daily Libero.
"Uttering anti-Semitic sermons that explicitly incite to violence and sectarian hatred is not acceptable," Alfano said.
"May my decision in this case be of warning to all those who think you can preach hatred in Italy".
The Muslim community in the Veneto region approved of the minister's decision.
"Islam is a religion on peace. Those who preach death must not be allowed inside the mosques," said Bouchaib Tanji, who is the president of the Veneto Islamic Federation and of the Assalam (Peace) association.