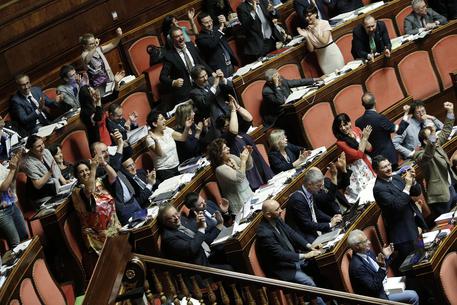 (ANSA) - Rome, July 31 - Premier Matteo Renzi on Thursday played down his government's first defeat over its bill to overhaul the Senate.
Earlier on Thursday the Upper House approved an amendment extending the responsibilities of the revamped assembly to "ethically sensitive issues" in a secret vote, with 154 Senators in favour, 147 against and two abstentions. Renzi had recently said he would not be surprised if secret votes enabled some lawmakers, including rebels within his centre-left Democratic Party (PD), to break the party line and help pass amendments contrasting with the executive's position.
He said he was confident the government would be able to fix any "jokes" played on it when the bill reaches the Lower House.
So while admitting "bitterness" about the defeat, he stressed Thursday that he did not think the defeat was "an internal PD affair".
"On the contrary, I'll bet it was the others," he said referring to opponents to bill within other parties backing it, including ex-premier Silvio Berlusconi's opposition centre-right Forza Italia (FI) party. He added that there could be no comparisons to the dramatic internal revolt that saw 101 PD lawmakers sink the party's official candidate to become Italian president, Romano Prodi, in a secret vote last year, paving the way for Giorgio Napolitano to reluctantly accept a second term as head of State. "This isn't a remake of the 101, although it leaves a bitter taste in the mouth," he said. Renzi wants the bill, which will see the Senate turned into a leaner assembly of local-government representatives with minimal lawmaking powers to save money and make passing legislation easier, to clear its first reading in the Upper House before parliament's summer recess next month.
But the bill is facing staunch opposition from the left-wing SEL party and the anti-establishment 5-Star Movement (M5S), while minorities within the PD and FI are also against it.
The bill's progress on the floor of the Senate has been badly hit by filibustering and the presentation of almost 8,000 amendments.
Senate Speaker Piero Grasso, however, has started to apply the kangaroo rule, which says that the outcome of voting on one amendment automatically counts for all similar amendments.
This made it possible to knock down over 1,800 of the amendments on Tuesday and Wednesday, amid furious protests from SEL and M5S lawmakers.