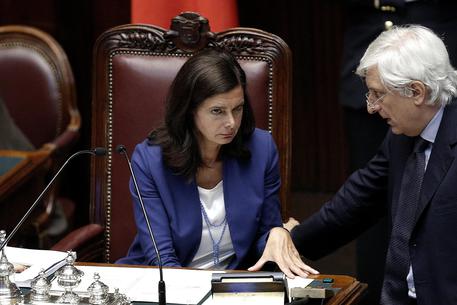 (ANSA) - Rome, July 24 - Lower House Speaker Laura Boldrini chastised parliament staff Thursday after some protested a government plan to cap salaries.
The measure is "an important and positive step," that will bring their compensation into line with conditions in the real world, Boldrini said.
She spoke after politicians in both the Lower House and the Senate approved the new guidelines for cuts.
Details are still being worked out.
Workers expressed anger, sarcastically applauding and shouting "thank you very much" and "bravo, bravo" as about 100 of them protested with a sit-in outside the Speaker's library.
But Boldrini said parliamentary employees must face similar constraints to the salary caps placed on senior officials at State-owned companies, adding that employees should learn to live with the same conditions facing other workers across Italy.
Boldrini said that she felt "sorry and saddened" that workers were pushing back, adding they must learn that they must live in the "real world in which there no more social safety nets".
In the spring, the government of Premier Matteo Renzi announced salary caps for top earning public-sector managers as part of his plan to tighten up and redirect government spending.
His plan, which saw those top salaries capped at the same level as the 248,000 euro wage paid to President Giorgio Napolitano, was controversial with some high-earning managers.