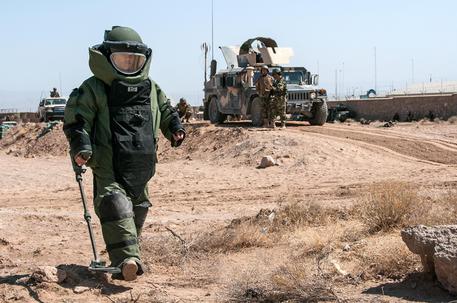 (ANSA) - Kabul, July 22 - A suicide bomber aboard a motorbike blew himself up in a military base Tuesday, killing some 10 people including three U.S. soldiers, police and local TV reports said.
Kabul police chief Gen. Zahir Zahir said that "at least four foreign citizens were killed and six wounded." Tolo tv said the foreigners were three American soldiers and an interpreter.
A Taliban spokesman claimed responsibility for the blast, claiming that as many as 15 foreigners had been killed.
Kabul police spokesman Hashmat Stekzai said "the attack happened in an anti-drugs base bordering with a foreign solders' base".
A U.S. Embassy statement did not specifically confirm Americans were killed in the attack, but condemned what it called "the terrorist attack that caused the death of five foreign security guards".
"Attacks like this will not discourage Afghans and the international community from working together for a further development of Afghanistan," said the U.S. Embassy statement.
In Pastori in the southwest province of Paktika, meanwhile, a suicide bomber detonated an explosive prematurely, killing himself and five comrades and wounding seven others, the Pajhwok news agency said.
There was no immediate comment from the Taliban on the own-goal blast.