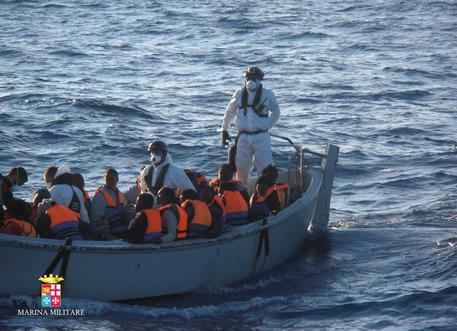 (ANSA) - Rome, July 22 - Italian police on Tuesday were trying to piece together the dynamic of Saturday's migrant boat disaster off the Sicilian island of Lampedusa and establish an accurate death toll on Tuesday after chilling new details emerged.
Migrants rescued by the Danish petrol tanker Torm Lotte in waters between Libya and Malta and taken to the Sicilian port of Messina told investigators that around 60 people had been stabbed by traffickers indiscriminately and their bodies thrown into the sea.
These deaths come on top of the 29 people known to have died by asphyxiation after the traffickers allegedly prevented dozens of migrants from leaving the hold.
Further, dozens of migrants are feared to have drowned during transfer to the Danish freighter from the rickety fishing boat that is thought to have been carrying between 700 and 750 people.
A child aged two was also found dead on arrival in Messina and a woman died while being transferred to hospital for treatment. Earlier in the day migrants told Repubblica.it that 181 people had died in the tragedy but investigators put a closer estimate at 141. On Tuesday five men presumed to be the traffickers were arrested on charges of multiple homicide. They were Mhamed Morad Al Fallah, 21, from Syria, Youssef Dahman, 21, and Abdrzakc Asbaoui Asbaoui, 25, from Morocco, Saddam Abuhddayed, 25, from the Palestinian territories, and Jamal Rajeb, 32, from Saudi Arabia.
Investigators have also established that a double tariff system applied to the sea voyage, with migrants of Arab origin paying 1,000-2,000 dollars for a place on deck and Africans paying 250-500 dollars for a passage in the hold.