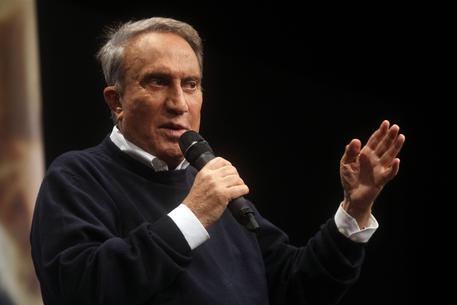 (ANSA) - Palermo, July 22 - Berlusconi allegedly set up 70 offshore bank accounts for his former aide Marcello Dell'Utri, former TV anchorman Emilio Fede told his personal trainer Gaetano Ferri in a 2102 recorded phone conversation that was made public Tuesday.
Dell'Utri, a 72-year-old former advertising businessman and former Senator with Berlusconi's now-defunct People of Freedom (PdL) party, is serving seven years in prison for conspiring with the mob.
Fede, a well-known former anchorman with the Berlusconi-owned TG4 television station, last summer was sentenced to seven years for aiding and abetting the prostitution of 26 women, many of them escorts, who between 2008 and 2009 were brought to so-called "bunga bunga" sex parties at the residences of then-premier Berlusconi.
"Look what he's getting out of Berlusconi…do you realize there are 70 foreign bank accounts, and Dell'Utri's name is on all of them?" Fede tells Ferri in the 2012 recording, which Ferri turned over to prosecutors. The recording was submitted into evidence in the ongoing State-Mafia trial in relation to alleged negotiations between the State and Cosa Nostra - in which Berlusconi is not implicated - to stop a series of bomb attacks in the early 1990s that claimed the lives of anti-Mafia judges Giovanni Falcone and Paolo Borsellino in 1992, among other people.
In that trial, former mobster turned State's evidence Antonino Galliano testified earlier this month that Berlusconi paid protection money to the Sicilian mafia Cosa Nostra in the 1980s, with Marcello Dell'Utri as the go-between.
In the recorded phone conversation, Fede goes on to disclose that Dell'Utri once allegedly tried to extort 10 million euros from entrepreneur Alberto Samorì in exchange for helping him become a candidate with Berlusconi's PdL party.
Italy's supreme court on July 1 upheld Dell'Utri's seven-year sentence, saying he asked the Mafia for over 10 million euros to fund Berlusconi film projects.
Fede on Tuesday that the recording is "a fake", that his words have been "manipulated" and he is suing "that crook for slander".