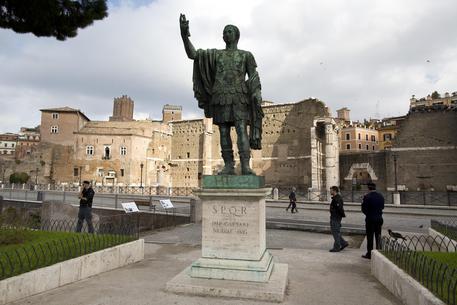 (ANSA) - Rome, July 16 - The Republic of Azerbaijan has announced it will donate one million euros to fund the initial phase of the excavation of Rome's Imperial Forum.
Mayor Ignazio Marino is hoping to raise additional funds from Italian and international donors to complete the ambitious two-year project, which has a total budget of four million euros. If successful, it will redraw the map of the Eternal City by ripping up a busy road routed through a vast archaeological site by the fascist dictator Benito Mussolini.
Marino's idea is to reunite the excavated Roman Forum and the imperial forums of Trajan, Augustus, Caesar and Nerva into one great archaeological park.
The archeology-loving mayor last year amid much controversy strictly limited traffic on the Via dei Fori Imperiali, which runs along the Forum to the Colosseum, making it pedestrian-only from June 28 to August 31 this year.
The first phase of the project will dig under the Via Alessandrina, a pedestrian road that runs from Trajan's column to Via Cavour in the valley between the Capitoline and Quirinale hills. "The area below the road surface will be fully excavated to reunite it with Trajan's Forum for the first time. We believe we'll find sculptures and key architectural fragments," said city archeology superintendent, Claudio Parisi Presicce.
In ancient Rome, the forums were commercial, legal, social and religious centers. Each was built as an extension of the original Roman Forum, constructed at the end of the first century BC by Julius Caesar. Emperors Augustus, Vespasian, Nerva and Trajan built successive forums, through 113 AD.
The Azerbaijani donation means Rome can put out a tender for bids within six months, the mayor said.
"We hope to raise additional funding in the coming months," Marino said. "We are in the final stages of talks with both Italian and foreign philanthropists.
This is not the first time Azerbaijan has pitched in to help take care of Rome's cultural heritage: in October, the Hall of the Philosophers at Rome's Capitoline Museum reopened after a six-month, 100,000-euro renovation courtesy of the country on the Caspian Sea.