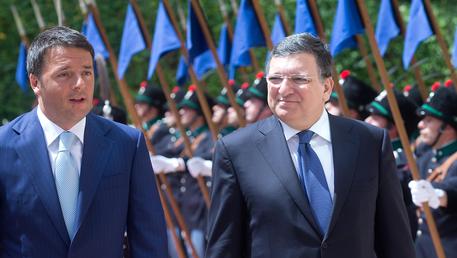 (ANSA) - Rome, July 4 - Premier Matteo Renzi on Friday told the Bundesbank to butt out of Italian politics while stressing that he had "excellent" relations with German Chancellor Angela Merkel.
Renzi sounded the warning after meeting European Commission chief José Manuel Barroso in Rome Friday for talks on Italy's six-month duty presidency of the EU.
The premier launched the presidency in a speech at the European Parliament on Wednesday in which he reiterated his call for the union to focus on promoting growth and fighting unemployment after years of painful austerity.
The speech drew criticism from members of the centre-right European People's Party (EPP) and from the Bundesbank, which are against Renzi's drive for greater flexibility in the implementation of the EU's budget rules. On Thursday Bundesbank President Jens Weidmann called for "fewer words and more deeds" on Italian reforms.
"The Bundesbank's job is assure that its statute goals are achieved, not to take part in the Italian political debate," Renzi, whose centre-left Democratic Party (PD) won over 40% of the vote in Italy in May's European elections, told a news conference. "The EU belongs to its citizens, not the bankers, neither Italian nor German ones".
The sparring was seen by some as highlighting different perceptions in Rome and Berlin about how far EU budget constraints can be eased to allow for growth-stoking spending.
On Friday Berlin moved to play down the row, with a spokesman saying that the Bundesbank's position was not the same as the German government's. Barroso said the EC fully supported Renzi's drive and said the EU needed his "enthusiasm" and "passion". "We need a strong Italy for a strong Europe," he added. But Barroso also said that the EU was not imposing reforms as Italy needed these anyway.
He also stressed that Italy had not won any changes on fiscal rules at last week's EU summit, just clarification that all the existing scope for flexibility in the budget regulations should be used.
"Flexibility was increased when we revised the Growth and Stability pact. The reform is already there but within full respect of the pact, as sanctioned by our treaties," Barroso said.